It’s the first Sunday in a while I’m not thinking “damn it….I have to work tommorow!” It feels weird and great…yet I´m a little worried about what I’ll be doing these upcomming months. I’m in a better mood today, specially with Mr. P but still feeling a bit down. I woke up, laid in bed for a while with Marti at one side an Mr. P at the other until my belly started craving some food. I love cooking breakfast so I made some scrambled eggs with tomato and onion (huevos pericos), arepa and Milo (chocolate milk). Yummalicious! In a while I leave for a rally against violence towards women. This week a woman died after being brutally raped and tortured. The guy who did it has been caught, what is amazing is that he has 2 charges of sexual assault against him, and has served time for murder…yet he is walking around as if nothing happened. The legal system in this country is awful and completely unfair. So, me and Marti are walking over to the meeting point to meet up with aunt and cousin Dani, hopefully I’ll meet up my friends Juli and Natalia who also said were going. After that, we’re heading out for lunch at a great place called Abasto (a MUST go if you’re ever in Bogota). The day isn’t too sunny but it’s not raining so that makes me happy. Time to get ready! 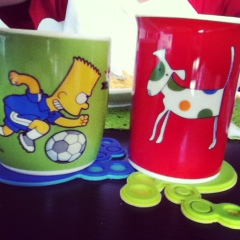 Filed under: Thoughts and Words, Uncategorized