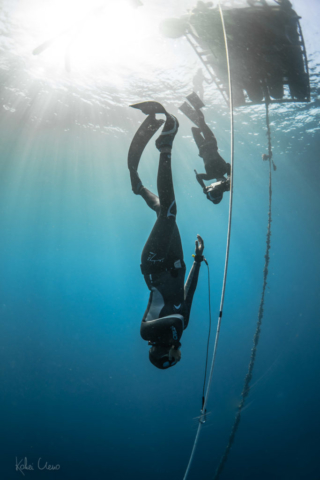 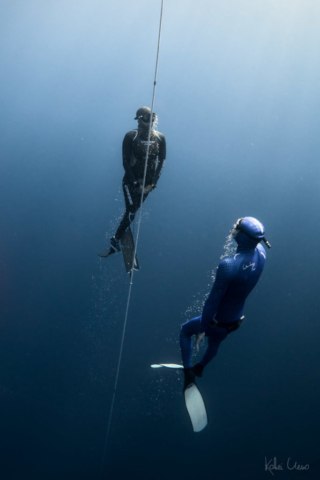 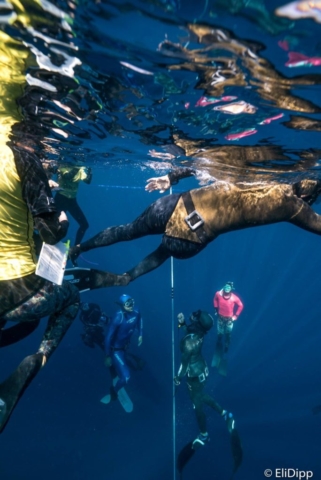 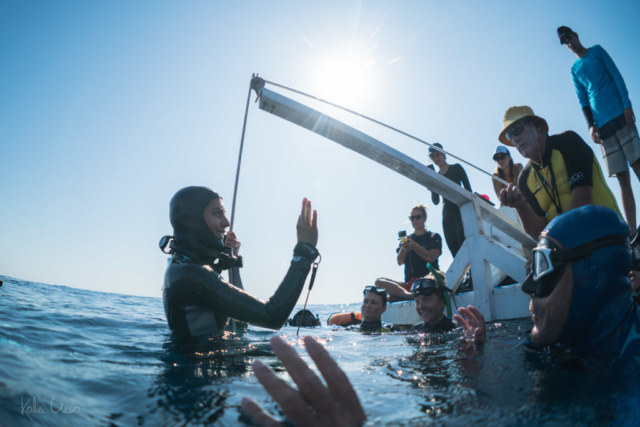 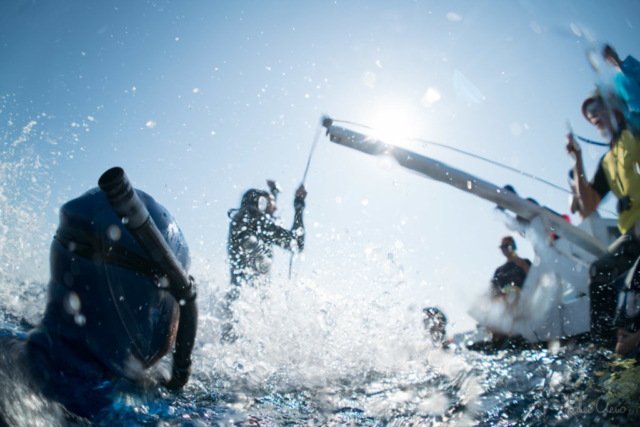 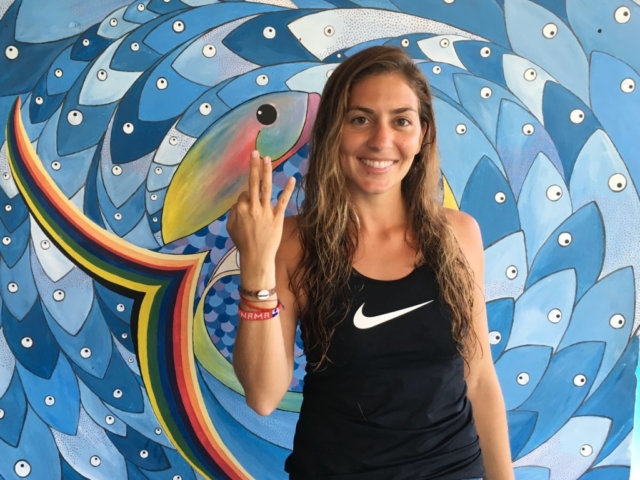 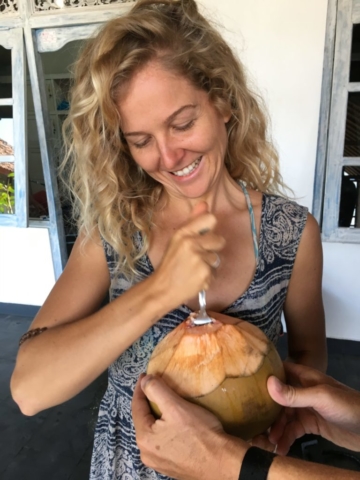 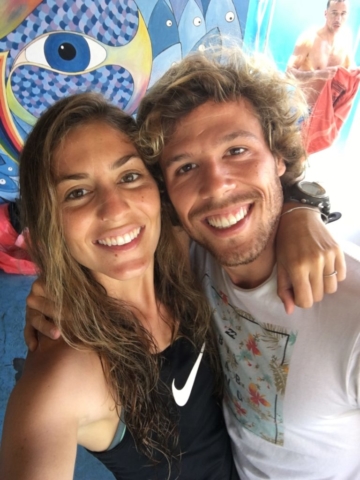 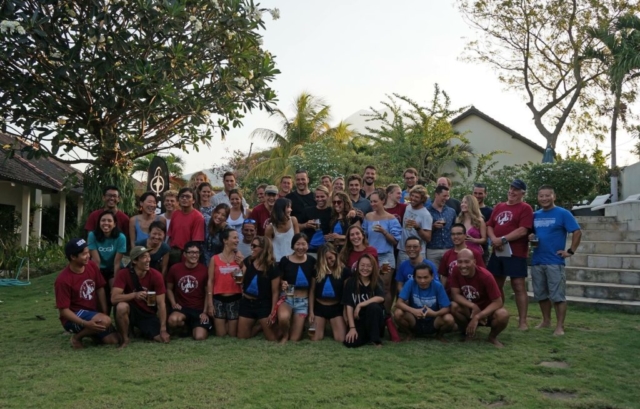 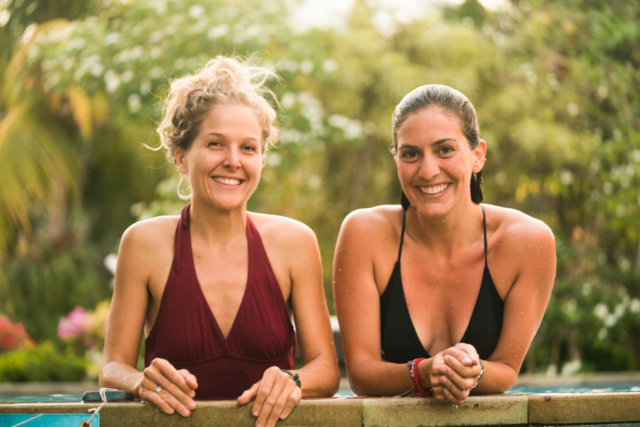 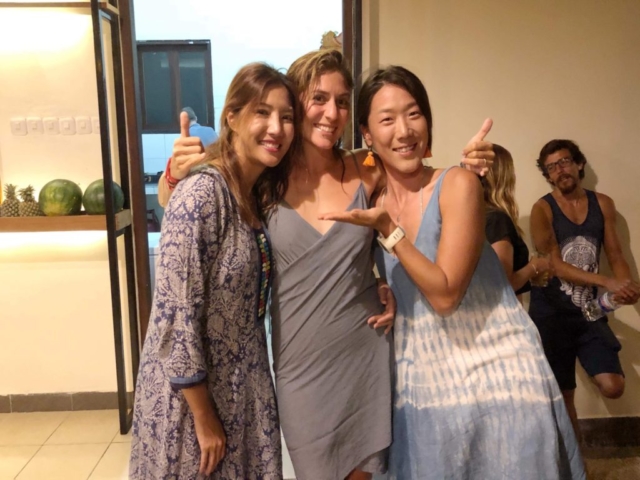 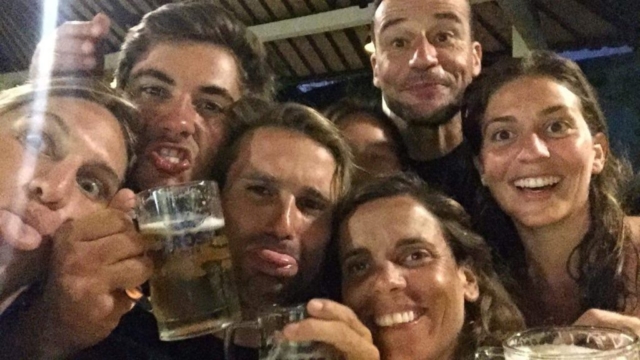 I woke up the final day with excitement and sadness knowing it was the last day and it was all coming to an end. Luckily, I was in the first group of divers again meaning I could get my dive done with while the water was still quiet… not many people around, no wind, no current, and mostly be able to enjoy the rest of the competition. For a third day straight I woke up to beautiful messages and support that gave me energy and joy for my dive. I went into the water with a clear focus. CW is definitely not my strong point so I visualized this dive many times the night before and after waking up. I went over to the warm up buoy and managed to do both my warm ups comfortably. My mind felt slow that day…as If I wanted to take in as much as I could of the experience while at the same time be distanced from it, in my own headspace. All I remember is that I had to keep calm, make sure my heart beat went down and remind myself that I could do this…that its only lactic acid, that I have enough oxygen.

Doing CW the rules regarding the rope are very strict. You are not allowed to touch the line after your airways touch the water, and in the bottom plate you are not allowed to touch the line past the candy cane marker. In FIM you don’t have to think about these things so having these new rules in my mind created a bit of anxiety…I pictured what I was supposed to do before my dive and that I had to grab the line after the tennis ball to avoid a yellow card.

I followed the same breathe up I’d been doing the previous days…focused a lot on my happy thoughts, on the hugs, and told myself “this is going to be the best dive ever” while I pictured the celebration after surfacing.

I opened my mouth, filled my stomach, my chest, relaxed…made sure to put my hands up before turning and then went underwater. I pinched my nose and began finning down…My technique is not the best, you can see my funky ankle/knee in the pictures, so I’m not as efficient as I’d like to be (yet). I went down to 20m, heard my alarm go off, did one more kick and let myself fall. “its only 20 seconds, you can definitely do this…just grab the line AFTER the ball” I told myself repeatedly. And then, once again, the tennis ball showed up in front of my eyes. I held on to the line (after the ball) and grabbed the tag. “Ok, now is the part that counts. Remember, it’s just lactic acid…it’s JUST lactic acid.” I began kicking up and when I saw my first safety I felt so much better. He could see that I was tense, and I obviously was! I should have let myself float to the surface without wasting energy but I didn’t, I looked up and kept kicking, wanting to get to the surface promptly. Constant weight is a mental challenge for me, every time!

I surfaced and did my recovery breaths followed by a clear protocol. The everlasting fifteen seconds came and I received another white card. I did it! 41m! New national record! One of the things that came to my mind were, “oh…I could have done more.” Which I think is a great way to feel after a competition dive. I much rather feel that way than have a bad experience or a penalty for not completing the dive. It just fuels me for the next one!

The rest of the morning was beautiful. The conditions were great, the friendly environment was there, the splashing and cheering after every dive, and a growing general desire to just enjoy a nice cold beer to celebrate the culmination of these three days.

Once again, I spent my afternoon lounging by the pool, eventually took a nap but off course it was way late and I really didn’t want to get up when it was time to go. I am a terrible napper. But I managed to get up, shower, and get ready for some pool party action!

The closing ceremony was early. I knew I wasn’t “winning” because I didn’t do the No Fin discipline so I wouldn’t have enough points which in a way I then wished I had done – who doesn’t want to win prizes? But I reminded myself my reasons for doing the dives and disciplines I did, I remembered my ear infection and my shift in mentality to approaching the competition and that feeling of ‘regret’ lasted about three minutes…after which I had a shot of rum courtesy of new friends and well, it was all happy thoughts after that! The night continued with increasing laughter, random rum shots that appeared in my hands, being thrown in the pool, losing my right-eye contact (definitely wasn’t driving home), and some very entertaining conversations that are somewhat buried in my memory file.

The next morning was spent enjoying my last hours in the hotel, under the sheets in the comfort of the A.C I wouldn’t be having any longer and room service breakfast. Eventually I had to check out and went to lunch at Apneista where I got some more hugs and smiles from people I love and had seen me training all these months. Met up there with some of the competition participants and it turned out I wasn’t the only one with random bruises on my body… scratches, bruises and cuts were the norm amongst us. You could say it was definitely a good night.

Looking back at my first experience competing and the decision I made of going forward with it regardless of things I was going through internally…all I can feel is a grand sense of self-pride. I decided to join the competition to have something to focus on, a set and fixed goal, something to keep my mind busy and my motivation going. It was such an important thing for me because at the time I signed up I wasn’t motivated. At all. I had put myself in a situation that caused a lot of internal conflict, I was feeling so angry and hurt, I was questioning some fundamental values and views of myself. Some of the training sessions were hard, I had to really dig into my head and pull out that athlete mentality from my years paddling, focus on what were my motivations, and simply push through. In retrospect it feels like with every dive that went by, every person I met along the way -in the water and out- it was all a time of reconstruction. Of re-building myself, stronger and more determined and better. This competition was kind of that big first step I needed to take after feeling so low for so long. I took advantage of every minute of it, I enjoyed everything and I really feel I made the best of it in every possible way. I am so thankful for everything that lead me to be in that state of mind, of fully being present and embracing everything that came up. I know I will cherish this experience for a very long time because it was such an important internal accomplishment. Sure, having the National Record was something I really wanted but in the end this competition was so much more than that to me. It was about finding myself again in the depths. It was about accepting things that I cannot control, and learning to trust myself again, to feel proud and strong, to realize I do have control over my mind and my reactions.

To the organizers, competitors, safety team, coaches, friends and family that supported me throughout or that are still reading this…Thank you. You have all been a part of something bigger than you think and I am so happy and grateful for having you be a part of this incredible learning experience.